The State of Michigan and its Department of Natural Resources (DNR) issued an “FAQ” document last week taking shots at angling and conservation organizations trying to protect our Great Lakes fisheries.

The state has presented what it views as the most frequently asked questions related to a proposed Great Lakes Consent Decree that it has signed with four out of five tribes with fishing rights in the Great Lakes. This proposed decree has been submitted to a federal court for approval, and its submission follows a tumultuous, secretive process leaving anglers and conservationists scratching their heads.

The Coalition to Protect Michigan Resources (CPMR), a coalition of conservation and angling groups, has been fighting on behalf of recreational anglers for the health of our fisheries since early in the negotiations. When it became clear that the State of Michigan no longer sought a roughly 50-50 shared fishery, the coalition made its objections known to the DNR and was thrown out of the negotiating room.

There is currently a GoFundMe set up to help offset some of the legal costs of this case. If you are a Great Lakes angler, please consider donating to help us stay in the fight!
For more detailed information, please go to CLICK HERE.

Gill nets at the heart of the disagreement

“Specifically, the proposed decree includes regulations to protect vulnerable fish populations…” reads FAQ bullet point one. How? It is well-documented why the 2000 Great Lakes Consent Decree removed millions of feet of Tribal gillnets from the Great Lakes fishery — they had devastating impacts on lake trout populations.

In fact, the State of Michigan banned gillnet usage for state-licensed commercial fishers in the 1960s after research concluded gillnets are non-selective and have disastrous consequences for bycatch populations.

In agreeing to millions of feet of new gill net fishing, the State of Michigan argues gill nets are selective, but it fails to recognize the very premise its argument is based on: “If their use in the Great Lakes was always destructive, they would not be used,” the FAQ reads. This is precisely why DNR employees are only allowed to use them to sample fish for research — they are incredibly effective at catching all the fish in an area in an expedited manner. The DNR uses gillnets because hook and line would be too costly and inefficient to sample multiple fish populations.

The FAQs also state that lake trout populations won’t be harmed: “The proposed consent decree would ensure that Lake Trout populations are carefully monitored and managed through harvest limits that result from complex population modeling and the application of sustainable mortality rates.”
→Read more

1. Donate to the Legal Fund.
2. Sign the Petition www.NoGillNets.com
3. Read all the Tribal Documents and Current News
4. Read the rebuttals, The CMPR will be filing objections to the proposed decree in the 12th District Federal Court in Kalamazoo on January 20th.

The Department and Executive Office of the Governor have been working towards negotiating a new Great Lakes Consent Decree with the U.S. government and with Michigan’s tribal governments that have rights reserved under the 1836 Treaty of Washington. After more than three years of negotiations, a new proposed decree was submitted to the U.S. District Court and is now a public document. Six of the seven parties in this negotiation were able to reach agreement on this proposed decree. The Sault Tribe is not supporting the document and has asked the court to be allowed to self-regulate and not be bound by any Great Lakes decree.

Right now, the 2000 Consent Decree remains in effect without a firm expiration date. The proposed Decree that is now public, is NOT in effect, and will not be unless and until it is ordered by the court. 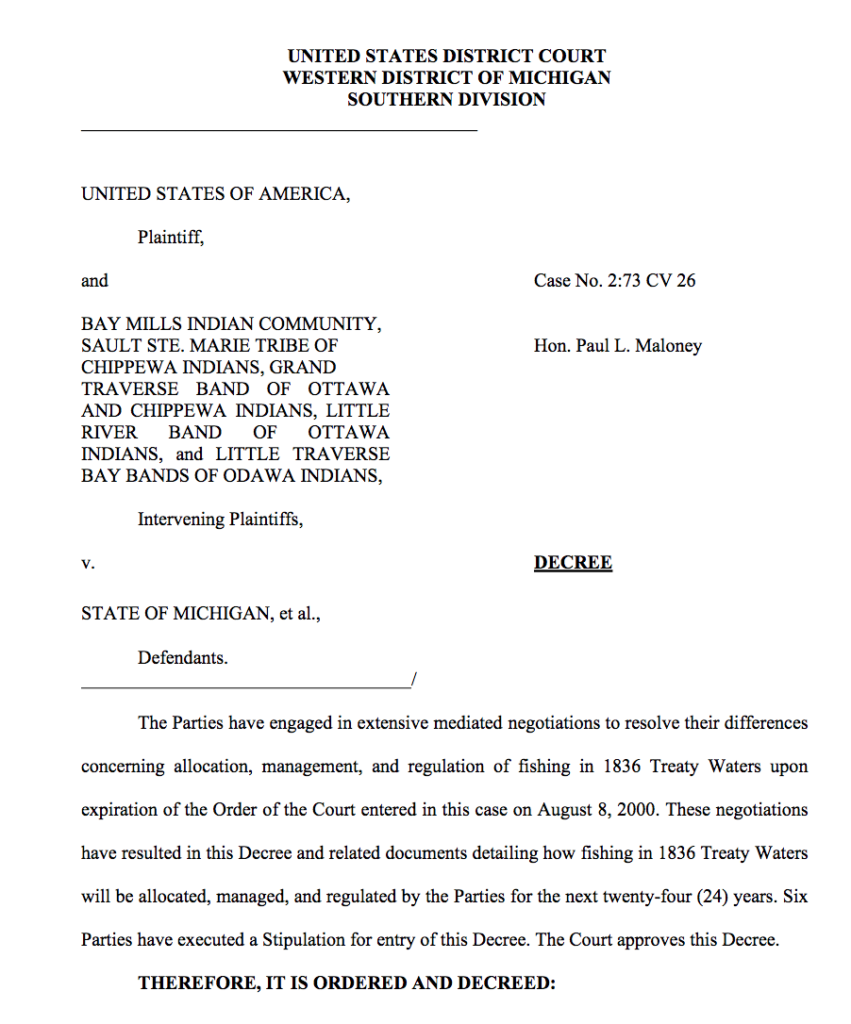