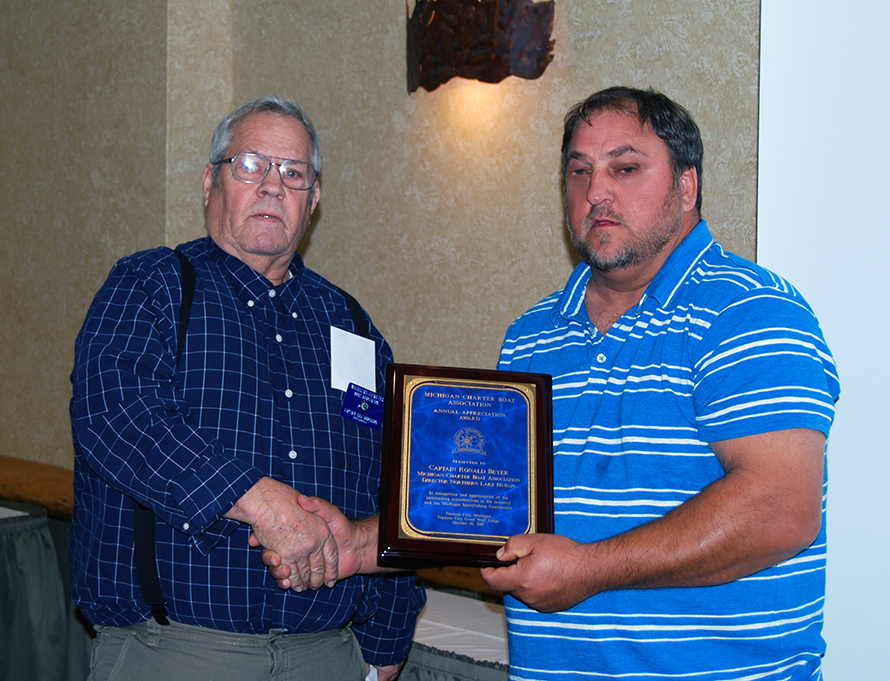 The MCBA Award is an award that is intended to recognize members of our association who have contributed of themselves above and beyond the call of duty for our association. This year 2018 MCBA Award was presented posthumously to former board member Ron Beyer.

Capt. Beyer joined MCBA in 1990, was appointed Port Captain for Harrisville in 2003, and elected to the board as Lake Huron Director in 2005, a position he proudly held until his passing 2013. He gave graciously and freely of his time to the all-volunteer organization.

“It is my privilege to honor the late Captain Ronald Beyer with the 2018 Michigan Charter Boat Association Award, “said President Eric Andersen. (Capt. Rick Konecke graciously accepted the award for the late Captain Beyer)
“Capt. Beyer put a lot of time and energy into the revitalization of Lake Huron after the salmon collapse in 2004. He also called attention to a lake trout population that was seriously declining at the same time and worked with the Michigan Sea Grant and Department of Natural Resources exploring ways to do everything possible to restore those fisheries. Capt. Beyer was a problem solver and was able to resolve matters in a diplomatic way.”

Capt. Beyer was instrumental in planning MCBA’s Annual Conference when it was held at the Holiday Inn in Alpena. He also made all the arrangements for the NOAA Museum tour that weekend.

Capt. Beyer was appointed by then-President Dick Stafford to the Lake Huron Citizens Fishery Advisory Committee in 2006. He was very vocal at these meetings, as he sought avenues to restore native fish stocks to Lake Huron, the lake he loved so dearly. The board and membership were always kept well informed of what was happening or planned for Lake Huron during his watch.