The Michigan Charter Boat Association celebrated 40 Years of Excellence at its Annual Conference held the third weekend of October at the Doubletree Hotel in Holland, MI.  Well over 100 captains and their wives, first mates, dignitaries, congress representatives, state fisheries biologists, the United States Coast Guard and special presenters were all part of the gala event.  Several long-time MCBA members said, ìIt was the best attended, most educational, and informative conference we have ever attended.

After an appreciated welcome to a packed conference room, President Terry Walsh turned the Saturday morning meeting over to Dr. Dan O’Keefe, Southwest District Extension Educator, who would act as the dayís moderator.

The morning’s first speaker was Jay Wesley, Acting Lake Michigan Basin Coordinator from the Department of Natural Resources.Lake Michigan had a great 2010 year class of alewife with a high survival rate that produced the most exciting Chinook salmon fishery we’ve seen in many years, Wesley said.  The fish were much larger than in previous years.  Twenty-pound salmon were pretty common last summer, and I think we can expect similar results in 2012. Wesley added that the angler catch per excursion was nearly six salmon.

The Coho salmon and brown trout fisheries were a pleasant surprise, according to Wesley, who said, They showed up in good numbers in angler catches.  And again, like the Chinook, they were much larger than in previous years.  One Coho tipped the certified scales at 29-pounds! 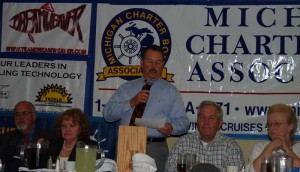 Wesley feels the brown trout fishery will be even better next year.  Steelhead remain stable, and lake trout are producing good catches.  Yellow perch fishing was considered good with much larger fish caught this year, and walleye and small mouth bass are developing fisheries.

A mass marking of Chinook salmon is also under way, Wesley said.  ìOur goal is to eventually mark all steelhead and Coho we stock as well.  This will be accomplished using a number of high-technology trailers that will coordinate the effort throughout the Great Lakes.  The Chinook salmon will have a numbered tag in their adipose fin that will indicate where they were stocked, Wesley continued.  Once they begin showing up in angler catches as mature fish, we will have a better understanding of their movement throughout the Great Lakes. Wisconsin and Indiana are also cooperating in a similar marking system, Wesley said.

Walleye represent over 40-percent of all recreational and charter harvest of walleye, Borgeson said, while Chinook are only eight to ten percent of the annual harvest from Lake Huron.  With the alewife gone, which were once a major predator of young walleye, the walleye population is booming in the lake.  Natural reproduction of walleye is close to six million fish a year, with Canadian rivers contributing largely to those numbers

Borgeson said all Chinook salmon plants at recreational ports have been suspended in Lake Huron except for three locations:  Swan Creek, which provides egg-taking for future stocking; Nun’s Creek (mandated by federal treaty with the Indians); and the Cheboygan River, which continues to sustain a good recreational fishery. Borgeson noted the four-year lake herring stocking program has also been temporally suspended until a more efficient means of collecting eggs during their spawning cycle is found.

Yellow perch showed up in improving numbers at Au Gres and Harbor Beach, though this fishery remains overall depressed.  Lake trout fishing continues to be stable.

Donna Westlander, who heads up the statistical data generated by Charter Catch Reports, said more and more captains are using the on-line reporting.  ìHoweverî, she cautioned, ìcaptains must still have a daily catch log onboard their vessels.î  Westlander also encouraged captains to check out the ìCharter Boat Surveyî section on the DNR web page.  Data is included by lake and port for all species each month.  ìIt doesnít take long to figure out the hottest ports for a given species, Westlander said.

Dr. Gary Medows presented a fascinating and educational look at mapping the Great Lakesí currents.  Early mapping was done by dropping a bottle overboard with a note inside saying where it was dropped. Once found, the location was reported.  Now anglers and boaters simply fire up their computers and go to the NOAA Weather web page, where a wealth of information on currents (their speed and direction), wave heights, wind direction and speed, and much more can be found.  Serious captains would not venture from port without first viewing the current NOAA Weather site.

Patty Bukholz, director of the Office of the Great Lakes, and Dr. Kelly Smith, Acting Director of the DNR, discussed the lake-wide management plan for the restoration and and protection of the Great Lakes.  ìOver 300 million dollars is invested annually in restoration initiatives involving toxic substances, ballast water discharges, invasive species (186 have been identified), near-shore pollution, and wildlife restoration,î Bukholz said.
Bukholz also listed the top five invasive species threatening the Great Lakes:
(1) Asian carp (which eat over 40-percent of their body weight a day and can reach weights of over 110 pounds), (2) round goby, (3) sea lamprey, (4) zebra mussels, and (5) Quagga mussels.
Dr. Kelly Smith pointed out that Michigan anglers and hunters generate 3.4 billion dollars annually for the Stateís economy and provide 46,000 jobs.  ìWe need to find a way to introduce more young people to our great out-of-doors,î Kelly said.  ìFor the past 10 or more years the sales of hunting and fishing licenses are down nearly 14-percent.  Thatís a tremendous loss of revenue which has a great impact on how we manage our fisheries and wildlife.î
Capt. Willis Kerridge presented one of the most interesting and in-depth seminars on how to catch Great Lakes salmon and trout this writer has ever attended.  He was very open in sharing the ìnuts and boltsî of his hottest fishing tactics that have made him one of the top captains on Lake Michigan.  Those of you who missed this one, missed one of the great fishing seminars in some time.
Saturday eveningís dinner speaker was John Goss, Asian Carp Director for the White House Council on Environmental Quality. Mr. Goss presented an in-depth look at the potential threat Asian carp pose for the Great Lakes.  When one had the opportunity to look at the ìbig pictureî of how established these invasive fish are in the countless streams and tributaries that all feed even larger rivers flowing toward Lake Michigan, it will be possibly the biggest environmental victory of the century if the carp can be stopped.  Goss pledged to do all in his power to make that happen.
The next order of the evening was the presentation of the Pistis Award, which honors Chuck Pistis, who has dedicated his career to the preservation of the Natural Resources of Michigan.  It is the highest award to an individual outside the Michigan Charter Boat Association.  This yearís recipient is Captain Dean Hobbs.  Capt. Hobbs is a graduate of the Great Lakes Maritime Academy and holds a Bachelorís Degree from Maine Maritime Academy. In 1976 he became the youngest Masterís License Holder on the Great Lakes.  He is a Senior Trial Master for Marinette Marine Corporation, has trialed 23 of the USCGís Cutter Class Ships as well as literal combat ships for the U.S. Navy. He has spent the last 19 seasons as captain of the Ludington Badger Ferry.
Captain Hobbs is also a licensed professional drug and alcohol program trainer, training and certifying not only Great Lakes captains, but the USCG and U.S Navy personnel as well.  Beginning in early November of 2010, he voluntarily came to the rescue of MCBA, working for months with Washington and the USCG while rewriting MCBAís Drug Program.  He has developed an on-line training program for all our captains and serves as our Chief Drug Administrative Officer.
The MCBA Award is presented annually to a captain who has given above and beyond to the promotion of the charter industry.  Past President Richard Haslett was this yearís recipient.  Capt. Haslett has been a licensed captain for over 25 years and given freely of his time promoting MCBA at our numerous outdoor and fishing shows.  He will assume full responsibility of representing MCBAís display and simulator booth after the coming show season.  Capt. Haslett currently charters out of Luna Pier on Lake Erie and Frankfurt on Lake Michigan with his wife Linda and daughter Jennifer as first mates.
The eveningís activities wrapped up with the annual scholarship raffle, handled so ably by another of our former presidents, Capt. Frank English.  Money generated by the raffle supports two of MCBAís $1,000 scholarships awarded annually to outstanding students in Michigan State Universityís Fisheries College.
Finally, a special thanks to MCBA Secretary and Program Chairman Capt. Jim Fenner, whose dedication and tireless efforts put this yearís very special annual event together.  Thanks, too, to captains Jim Shutt, John Giszczak, and Larry Lienczewski for their roles in making this conference a great success.
If you enjoyed this post, make sure you subscribe to my RSS feed!
Discussion disabled.
Category: MCBA News
Tags: Fishing News