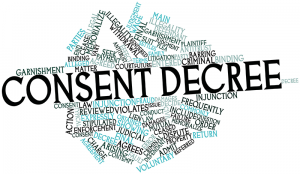 The 2000 Consent Decree is a Federal Court order that represents a negotiated agreement between the United States, the State of Michigan, and Five Native American Indian Tribes signatory to the 1836 Treaty of Washington. This court order was signed in August of 2000 and expires in August of 2020.

The DNR Fisheries Division has begun the internal process of preparing to negotiate the next Consent Degree.

The MCBA is in full support of DNR and would like to have as much input as possible in the 2020 Consent Decree, since it affects about 70% of our membership. Since the MCBA cannot afford to secure a lawyer of its own to support the DNR, the MCBA Board has decided to pool its resources, and join the ‘Coalition to Protect Michigan Resources’, which has been an amicus to the original Judge Fox/Tribal/US/State Great Lakes court case.

The Coalitions’ roots started with the Grand Traverse Area Sport Fishing Association in the mid 1970’s. William Hicks, leader of the Association became concerned about expansion of Tribal commercial fishing. Avert phase I of the Judge Fox case reaffirmed in May of 1979 three tribes rights to fish with their own rules in the Great Lakes. Hicks hired attorney Ted Swift from Foster Swift Collins and Smith of Lansing to represent the Association’s interests. Steve Schultz, attorney originally from the same firm, became involved in 1983 and represented the Grand Traverse Area Sport Fishing Association and the Hammond Bay Area Anglers Association in 1999. Currently, Schultz is cofounder of Fahey Schultz Burzych Rodes PLC and has been representing the coalition for Tribal Fishing, hunting and gathering issues for over 30 years. There are very few attorneys who have this vast amount of experience with this issue.

The amicus status was granted when phase II of the Fox decision commenced in 1983 when the three Tribes asked the court to allocate the Great Lakes Fishery resources to the Tribe and State. At the time, Steve requested that Grand Traverse Area Sport Fishing Association become an amicus and Federal Judge Richard Ensien granted the petition and welcomed input of sport fishing groups to the case. Their amicus status continues today through the coalition.

When the expiration date of the 1985 Great Lakes Agreement was approaching, it became clear to both Grand Traverse Area Sports Fishing Association and the Hammond Bay Area Anglers Association that they would be more effective and reduce individual costs of litigation if a coalition was established with more organizations. The result was the formation of the Coalition to Protect Michigan Resources which was originally known as the Michigan Fisheries Resource Conservation Coalition but was changed to the new name when several additional members were added prior to the Inland State / Tribal / US Hunting Fishing and Gathering negotiations.

Steve Schultz and members of the Coalition were present at the negotiating table during both the 2000 Great Lakes and the 2007 inland negotiations. Both agreements required two years to complete. The coalition representatives communicated regularly with the State (AG office, Fish Chief, Governor’s Office, Directors office, and others) and caucused with them during breaks at the negotiations. The Coalition has representatives at the annual Executive Councils meetings when the State, Tribes, US amici and the public meet. During these meetings issues concerning both agreements are discussed.

The negotiations for all decree agreements have been confidential, and unless an association is part of an amicus group, the outcome and direction of the negotiations will not be known until after the agreement is signed. Each of the amici signed confidentially agreements and the information can be shared and discussed only between members of a small advisory committee that each amicus association has.

The MCBA Board Members are working hard to keep up with what is going on with our Michigan Fishery.
We appreciate your support.