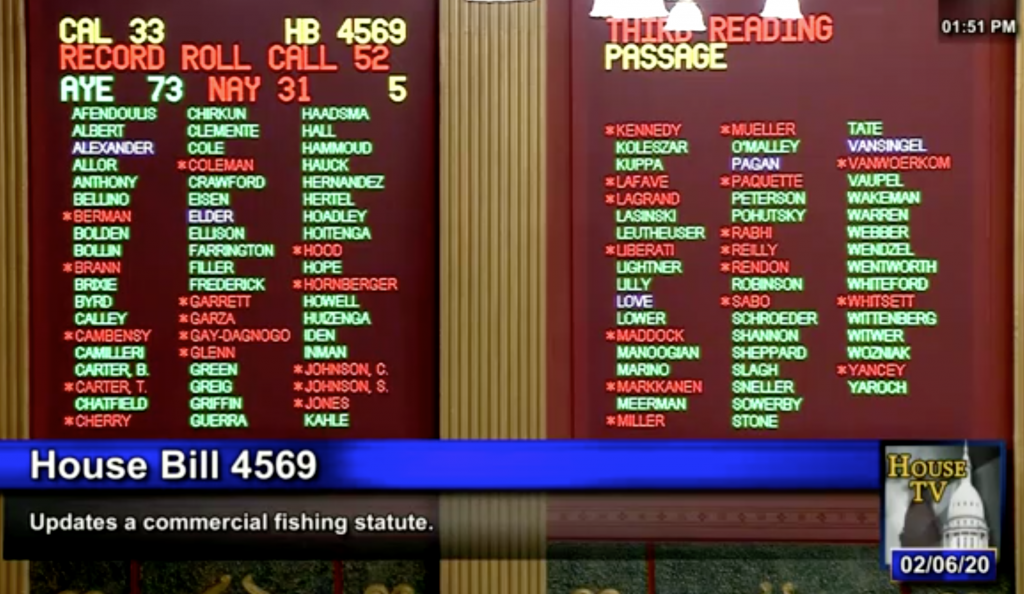 Amy Trotter, Executive Director of MUCC writers: Game fish are one step closer to swimming away from commercial nets as the Michigan House of Representatives voted to pass House Bills 4567, 4568 and 4569 on Thursday.

MUCC Executive Director Amy Trotter said bringing our commercial fishing regulations into the 21st century is imperative as we look to the future management of our Great Lakes fisheries.

“Modernizing decades-old statute is an important first step in protecting game fish from commercial interests,” Trotter said. “Hunter and angler dollars fund the bulk of fisheries management in our state, and our members have demonstrated they won’t stand for subsiding the commercial industry.”

MUCC and its 40,000 members also would like to thank the bill sponsors: Representatives Lilly (R-Park Township), O’Malley (R-Lake Ann) and Wendzel (R-Watervliet). All three sponsors dug into the issue at hand, spent countless hours talking with stakeholders and poured over the information provided to them.

Lilly spoke on the House floor thanking recreational anglers for their continued support of the resource.

“I’m proud to say Michigan has a vibrant and recovering sport fishery as a direct result of monies collected from the sportfishing community,” Lilly said. “Over the years, recreational anglers have invested hundreds of millions of dollars in the restoration of these species.”

Michigan United Conservation Clubs (MUCC) thanks its members who utilized its grassroots policy process and took direct action by calling or emailing their representative. Your voice made a difference and helped protect Michigan’s game fish. More importantly, your voice helped make clear that recreational anglers will not stand for subsidizing the commercial fishing industry.

Please check the vote count pictured below and call to thank your representative if they voted to keep game fish out of commercial nets (yes votes are in green).

The three-bill package now moves to the Michigan Senate. To be notified on activity in the Senate, please click here!