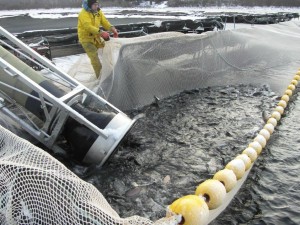 “In Michigan, legislators have a Constitutional duty to protect our Great Lakes,” said Jones, R-Grand Ledge. “By allowing commercial fish farming we can say goodbye to our Pure Michigan status and hello to an undrinkable Toledo water supply.”

Jones said commercial fish farms in the Great Lakes are all risk and no reward. These are proven sources of pollution, invasive species, disease, and fugitive fish escaping to wreak havoc on our Great Lakes fisheries.

Caged fish culture was developed to produce thousands of fish with the purpose to sell as food. These factory fish farms are floating nets placed in waterways and are huge threats to the existing ecosystem.

“Concentrated fish poo is just not Pure Michigan,” Jones said. “A typical 200,000-fish operation creates as much waste as a city of 65,000 people, which would make the Great Lakes a giant toilet bowl.”

Only Canada is currently allowing aquaculture in the Great Lakes, and they are now trying to get out of the business. Ontario is the only jurisdiction to allow fish farms on the Great Lakes and there has not been a new farming permit issued in nearly 20 years.

Fish waste contains phosphorous, which is beneficial for ecosystems in minimal amounts. However, a concentrated amount of phosphorous, found in fish farms, can cause widespread algae blooms like the one that devastated Lake Erie. Algae blooms are steadily becoming more common throughout the Lakes. An algae bloom led to the undrinkable water supply in Toledo.

“The waste in a commercial fish farm would stay where Michigan families enjoy swimming, boating, fishing and paddling,” Jones said. “Unlike ocean fish farms, where tides flush away the waste, it will stay in the coastal region of the Great Lakes.”

Jones said that to see the best example of the unintended consequences of aquaculture, residents have to look no further than the Asian Carp knocking on the door of Lake Michigan. These invasive fish were originally brought in to clean aquaculture and wastewater ponds. All it took was a flood and they established themselves as the greatest threat the Great Lakes has ever seen.

“Regardless of how many safeguards are put in place, there is always some threat that will be unaccounted for, and one mistake here can threaten the entire Great Lakes economy,” Jones said. “Asian Carp are just one horror story for the Great Lakes. We don’t need to introduce these fish farms for something else to go wrong.”

Jones said crowded fish cages are breeding grounds for disease that can spread to our wild fish population. In 2007, a virus wiped out 70 percent of the fish in Chile’s huge salmon farming industry. Unlike Chile, Michigan has wild salmon.

“Imagine what could happen to our wild salmon population if such a virus was introduced into our waters. They’d be gone,” Jones said.

Jones said that inevitably these farm fish will escape, and when they do they will destroy our Great Lakes fishery. There have been reports in British Columbia of 400,000 fish escaping their nets, and another 300,000 in Scotland. These fugitive fish compete with wild fish for food, disrupt their natural reproduction and interfere with their genetic diversity, ultimately making it very difficult for the wild fish to survive.

Sport fishing in Michigan supports 15,000 jobs, and the Great Lakes fishing industry contributes $7 billion a year to the economy. The Great Lakes has some of the world’s greatest steelhead fishing, a type of rainbow trout.

“A proposed fish farm growing rainbow trout would put our sport fishing industry, as well as the species, in grave peril,” Jones said. “This risk is too great to only create a handful of jobs and allow fish farming into the Great Lakes. When that rainbow trout inevitably escapes it will jeopardize the entire steelhead population.”

Jones said that there is a right way to do aquaculture. Closed-loop aquaculture operations can help meet the demand of the proponent’s contribution to feed the world’s growing population, without damaging the Great Lakes. These are systems on land that use a separate water supply to allow more control over fish waste, which can actually be harvested for fertilizer.

“Detroit and other cities with vacant buildings are prime candidates to support the creation of these contained systems and bring a thriving industry to our economy,” said Jones. “The Great Lakes are ours to protect, and there is no room for concentrated fish poo in Pure Michigan. Allowing fish farms into the Great Lakes is too much of a risk for no reward.”

Senate Bill 526 has been referred to the Senate Agriculture Committee for consideration.