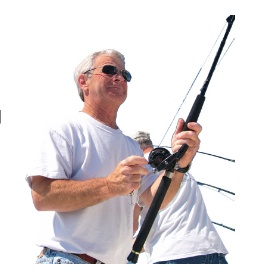 Commerce Twp., Mich., November 26, 2019 – The Michigan Boating Industries Association (MBIA) will honor Captain Denny Grinold, former president of the Michigan Charter Boat Association for his outstanding contributions to the recreational boating and fishing industries through leadership, dedication, innovation, and personal motivation with the Ray L. Underwood Lifetime Achievement Award for 2019. The award presentation will be made during the Awards Dinner at the Recreational Boating Educational Conference on December 4 in Lansing, Mich.

“Denny has spent a lifetime tirelessly advocating for fishing, boating, and tourism in Michigan and has been recognized by many,” said MBIA Executive Director Nicki Polan. “His list of accomplishments is long, and we are grateful for his advocacy on important legislative issues and his innovations and partnership building, which have brought us promotions like the “Catch and Cook” program in Michigan.

In addition to owning and running an auto repair business in Lansing, Grinold is a 30-year veteran charter boat captain based out of Grand Haven is an avid Salmon fisherman. Outdoor Life Magazine has included Grinold as one of the 20 best anglers in the planet more than once. The Michigan United Conservation Clubs named Grinold as the ‘Fisheries Conservationist of the Year.’ He has also been honored by the Michigan Salmon and Steelhead Fisherman’s Association with the Dr. Howard Tanner Award, named after the man behind Great Lakes Salmon. The Great Lakes Fishery Commission honored Grinold with the C.D. “Buzz” Besadny Award for fostering Great Lakes partnerships. He also has been appointed to the Michigan State Waterways Commission.

“Denny’s advocacy has always aligned with our MBIA mission to promote, protect and advance the recreational boating industry in Michigan. Because of his dedication, the MBIA Board of Directors has unanimously voted to award him the prestigious Ray L. Underwood Lifetime Achievement Award,” said Polan.

MBIA is the official, state-wide marine industry association which serves as the voice for Michigan’s $7.8 billion marine industry and the four million people who enjoy Michigan’s nearly one million registered boats. The MBIA is dedicated to the advancement, protection and promotion of boating across Michigan. The MBIA produces three association-owned boat shows, the Detroit Boat Show at TCF Center, the Novi Boat Show in Novi, and the Metro Boat Show in Harrison Twp.  The proceeds from these shows benefit boating in Michigan through MBIA programs and promotions. For more information about the MBIA, and a full list of award recipients go to www.mbia.org or call 734.261.0123.

Earlier this year, we updated you on the agreement between the State and five Michigan Tribes that have governed Tribal commercial and sportfishing in the northern Great Lakes for the last 20 years. (The map below shows the Tribal areas.) That agreement was set to expire on August 8 of this year and … END_OF_DOCUMENT_TOKEN_TO_BE_REPLACED

The Michigan Charter Boat Association represents over 600 professional captains that serve over 100 ports in Michigan. As one of Michigan's largest recreational organizations, member captains operate fishing charters on the Great Lakes, River Guides on Michigan's thousands of miles of steams and rivers, Sail boat charters out of many Michigan ports of call, Scuba Dive charters in Michigan's shipwreck dive preserves, and scenic cruises exploring the beauty of Michigan's shoreline, lighthouses, or a lake vacation adventure. These businesses contribute to Michigan's tourism economy and are vital to the region. Michigan Charter Boat Association Captains and their vessels meet all state and federal laws.