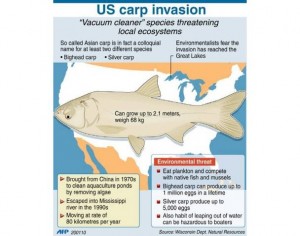 17-State Anti-Invasive Species Coalition Tells Congressional Leaders to Pass Legislation Shaving Three Years Off the Current Plan
LANSING – Michigan Attorney General Bill Schuette today announced that the newly formed national coalition of seventeen attorneys general fighting the spread of Asian carp and other aquatic invasive species though Chicago waterways have sent a letter to the leaders of three Congressional committees calling for them to move federal legislation (H.R. 892, S. 471) that would force a quicker resolution to the on-going study currently being conducted by the U.S. Army Corps of Engineers. In particular, the coalition called for legislation to:

“These states understand that the job-killing invasive species flowing freely though the wide-open doorway in Chicago must be stopped now,” said Schuette. “We are turning up the heat on federal officials dragging their feet at our expense. It is too bad we need legislation to do this, but it is time for the Army Corps of Engineers to get to work.”

Schuette recently announced the results of his efforts to build a coalition beyond the Great Lakes, which resulted in 16 states joining with Michigan so far: Arkansas, Arizona, Colorado, Iowa, Kansas, Louisiana, Minnesota, Missouri, New York, Ohio, Pennsylvania, South Dakota, Utah, West Virginia, Wisconsin, and Wyoming. These states have joined Michigan’s fight to stop Asian carp from entering the Great Lakes because the “open door” at Chicago has allowed invasive species to flow both ways, both into and out of the Great Lakes, reaching far and wide across the United States.
In July 2011, the Army Corps of Engineers released a list of 40 aquatic invasive species with the highest risk of traveling through the waterway in either direction. Of those species, 30 pose a high-risk to the Mississippi River Basin and ten, including Asian carp, pose a high-risk to the Great Lakes Basin. Current invasive species control efforts in the Chicago waterway, like electrical barriers, are temporary and experimental and do not address the threat of all 40 species, especially those that may travel downstream.

The Stop Asian Carp Act was introduced earlier this year by sponsors Representative Dave Camp (R-MI) (H.R. 892) and Senator Debbie Stabenow (D-MI) (S.471). The coalition letter and supportive briefing paper were both sent to Chairmen and Ranking Members of the following congressional committees charged with reviewing the legislation: the House Committee on Transportation and Infrastructure, the House Committee on Natural Resources, and the Senate Committee on Environment and Public Works.

Schuette noted a recent study commissioned by the U.S. Army Corps of Engineers and conducted by independent scientists at the Center for Aquatic Conservation at the University of Notre Dame identified the Chicago Waterway as a “major pathway” for the spread of invasive species, concluding that “the canal represents a potential highway to environmental havoc for many species that pose a high risk to both the Great Lake and the Mississippi basins.”