Contact: Todd Kalish (231) 631-3410 or Ed Golder (517) 335-3014
The Department of Natural Resources (DNR) announced today that a portion of the lower Betsie River and the eastern end of Betsie Bay (also known as Betsie Lake) will be closed to fishing from October 10, 2012, until further notice to protect the fall salmon run in the Betsie River.
While the closure will not officially go into effect until October 10 – the earliest date it can be enacted under state law — the DNR is urging anglers to avoid the area. “Anglers walking around on the exposed sand flats are unintentionally spooking fish, causing the fish to beach themselves and die before they can enter the river to reproduce,” said Justin Vanderlinde, DNR Conservation Officer for Benzie County, where the river and bay are located. 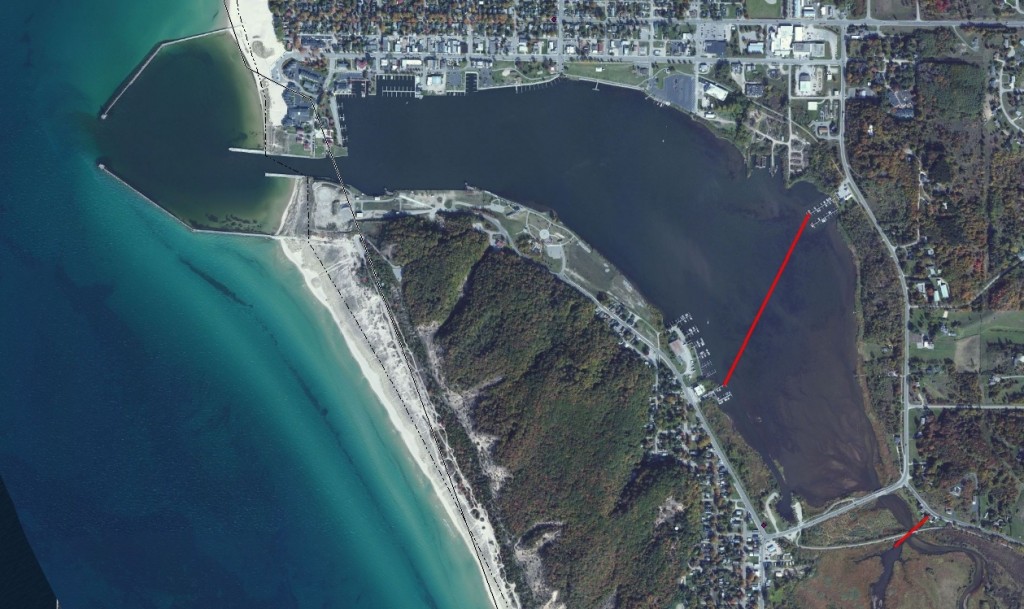 Low water levels in Lake Michigan have caused very low water levels in the east end of Betsie Bay, with sand flats becoming exposed. Because of the extremely low water, Chinook salmon are exposed to high water temperatures and have had a hard time entering the Betsie River to spawn.
The fishing closure will read as follows: “East end of Betsie Bay (or Betsie Lake) closed to fishing from October 10 until further notice. Closure from the Betsie Valley Trail Bridge (former RR trestle bridge) west to a line in Betsie Bay between the westernmost dock of the Northstar Marina and the westernmost dock of the Eastshore Marina (see attached figure). The closed area will be marked with buoys.”
The order declaring the closure will be signed Monday, Sept. 17, 2012. Under state law, 21 days must elapse after the order is published in a newspaper in the affected county or counties before it can take effect. Publication will take place Wednesday, Sept. 19, 2012, making the order’s effective date Oct. 10, 2012.
According to Todd Kalish, Lake Michigan basin coordinator for the DNR, the Betsie River salmon run is made up mostly of wild, naturally reproduced fish. “The Betsie River is not stocked by the department,” said Kalish. “The Betsie River provides outstanding spawning habitat, particularly for Chinook salmon, and has become famous as a salmon fishing river. The wild salmon produced in the Betsie River provide fishing for many anglers, including those on Lake Michigan, Betsie Bay, and the Betsie River. That’s why it is so important that we allow these fish to proceed upstream to spawn.”
Despite the closure, much of Betsie Bay remains open to fishing. The deeper western and central portions of Betsie Bay will still be open. This includes the publicly accessible fishing piers at the “Open Space” in Frankfort and at Bayfront Park in Elberta. Salmon fishing opportunities can also be found at other nearby areas, including Platte Bay and the Platte River, Manistee Lake and the Manistee River, and Bear Creek.
If Lake Michigan levels remain low, the fall and spring steelhead runs may also be threatened. It is for that reason that the area will remain closed to fishing until further notice. “It may be necessary to keep the area closed in the spring as well to protect the steelhead run,” said Kalish.
If you enjoyed this post, make sure you subscribe to my RSS feed!
Discussion disabled.
Category: MCBA News