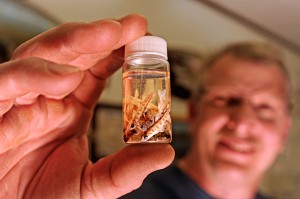 The prized game fish were originally native to Lake Ontario, but experienced a massive population decline by the late 1800’s. Today, Atlantic salmon are stocked in the St. Mary’s River and in other parts of the upper Great Lakes.

While conducting research for his senior undergraduate thesis on sturgeon, Stefan Tucker found what he suspected were Atlantic salmon fry in the St. Mary’s River. His identification was later confirmed by University of Michigan taxonomist Gerald Smith. Tucker and a team of researchers concluded that the Atlantic salmon population is indeed naturally reproducing.

A press release from Lake Superior State University explains the implications of this finding:

The discovery is not only exciting for those at LSSU, the Michigan Dept. of Natural Resources, and others who have been involved with stocking Atlantic salmon in the upper Great Lakes for more than two decades, but also to anyone who follows the changing dynamics of the Great Lakes, especially in relation to lake trout and salmonids.

Though this discovery answers one question, it begs others.

Tucker concluded his thesis by stating that “the extent of natural reproduction and mechanisms influencing reproductive success are unclear and warrant further attention.”