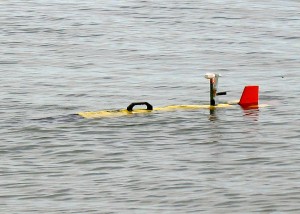 WEST LAFAYETTE, Ind. – Researchers at Purdue University are using a robotic submarine and other specialized tools in Lake Michigan to gather biological and environmental data showing how young fish vital to the ecosystem may cope with future climate change.

The researchers are correlating larval fish growth with various factors, including water temperatures near the lakeshore, where wind patterns might be altered by climate change and threaten fish populations, said Tomas Höök, an assistant professor in the Department of Forestry and Natural Resources.

“These larval fish are very vulnerable because they are not fully developed and cannot swim well, so they are really at the mercy of their environment,” Höök said. “Growth rates during the larval stage in part determine how well young fish survive to become adults. Rapid growth allows young fish to swim faster and, thereby, avoid predators, consume more food, and actively select warmer, more favorable waters. Otherwise, they can quickly starve to death.”

Research has suggested that climate change might alter wind patterns on the Great Lakes. The lake winds are important because they play a key role in the survival of young fish and cause “upwelling events” that ferry cold water and nutrients from lower depths up to the near-shore zone.

“As a result of these upwellings, the fish in that zone see a temperature change of about 5 degrees to 10 degrees Celsius, which has a huge impact on metabolic rates,” Höök said.

The Purdue team is studying the larva of yellow perch and alewives in Lake Michigan, near Michigan City, Ind., where both fish are abundant in the lake’s near-shore waters. Yellow perch are valued for fishing, while alewives are ecologically critical because they are primary prey for the lake’s salmon and trout.

“We need to learn how physical properties change in the near shore and how that influences fish survival,” said Cary Troy, an assistant professor in the School of Civil Engineering who is working with Höök.

The researchers are using an autonomous underwater vehicle to measure slices of water quality. The slender, battery-powered vehicle is about 3 feet long and is programmed to trace specific routes in collecting data such as oxygen and chlorophyll concentrations, pH, and turbidity. Strings of sensors extending to the lake bottom from buoys also are recording temperature readings every 15 minutes.

The near-shore region is defined by waters up to a depth of 15 meters, which extends several miles in Lake Michigan because of the lake’s gradually downsloping seabed.

“It’s an incredibly dynamic part of the lake,” Troy said. “You have rapid influxes of cold water, which can negatively impact the larval fish. Any time the wind direction changes, that affects where you get cold-water masses. Almost all of the motion in the Great Lakes is governed by the speed and the direction of the wind.”

Other researchers have shown that the strength and direction of lake winds have shifted in recent decades.

“The idea is that if we can correlate larval fish growth and survival with wind patterns right now, and these correlations hold in the future, then we can use climate models to tell us how the wind will likely change and then speculate how fish might be affected in the future,” Troy said. “It’s too early to say whether we’ll see more or fewer upwelling events, but the frequency of them is likely to change, and that will have an important effect on larval fish.”

The Great Lakes are the largest surface freshwater resource in the world, providing drinking water to millions of U.S. and Canadian citizens, harboring habitats for birds and fish, and generating millions of dollars in regional commerce from recreation, shipping, commercial fisheries and water-dependent industries.

The researchers analyze structures called otoliths, or “ear stones,” tiny calcium carbonate structures that grow in the larva. Because the structures grow in layers as the fish age, they possess rings similar to those in trees that can be analyzed under a microscope to gauge the age and growth characteristics of the larvae.

“For example, the distance between growth rings reveals how well they grew in certain periods,” Höök said. “We’re also looking at the larval diets – what and how much they are eating. There is some consensus that the survival of larval fish has a large impact on the survival of the entire populations of fish species.”

The scientists also study larval growth and health by analyzing the ratio of genetic material RNA to DNA.

“In a cell, you have a fixed quantity of DNA, but the amount of RNA changes over time, depending on how much protein the organism is making,” Höök said. “If there is a lot of protein synthesis going on, there is a lot of RNA and the larvae are growing well.”

Research findings will detail the distribution, growth and survival of young fish. Two graduate students are working with Troy and Höök on the project, which is funded by the Indiana Department of Natural Resources through the National Oceanic and Atmospheric Administration.