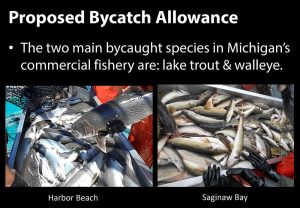 A few years ago, a Michigan State University fisheries student spent an entire summer on commercial fishing boats in Saginaw Bay. His objective was to determine the amount of walleye caught as “by-catch” (non-targeted species) in commercial small mesh trap nets. The results estimated that between 23,500 and 102,000 walleye are easily killed in commercial nets during the course of a given season.

So why is the DNR even thinking of allowing commercial netters to keep five pounds of walleye “by- catch” per net each time nets are pulled when annually such a large number of walleye are killed each season? Under the proposed new law a netter with 20 or more nets listed on his license would be al- lowed up to 100 pounds per license whether or not he actually had that many nets set. If all the current licenses in Saginaw Bay were active and fished, up to 680 pounds of walleye can be kept each day the nets are lifted. Instead, the emphasis should be placed on compensating the commercial netters and removing as many small mesh trap nets as possible from the bay.

For the last three years the DNR has been telling the Lake Huron Citizens Fishery Advisory Committee (LHCFAC) its “goal is to is to get all the commercial nets out of Saginaw Bay to speed the recovery of yellow perch”. Allowing the commercial fishers to keep walleye will merely increase the value of the licenses and encourage the continued use of the nets instead. Walleyes are currently classified as a sport fish and are not approved for commercial harvest. This was decided in the State courts several years ago when commercial netters were trying to take advantage of a growing walleye population in Saginaw Bay. Over the last six years, however, negotiations without public input have been occurring to allow the commercial “by-catch” of walleyes.

The two main by-catch species in Michigan’s commercial fishery are: lake trout & walleye. Walleye and lake trout are two of the most important sport species in the Great Lakes yet they are not listed as sport or commercial species in the pro- posed commercial fishing Statute. The Director would have the authority to designate any species as commercial if it is not on the sport fishery list, and this leaves the potential that both walleye and lake trout could become commercial species in the future.A major concern of boaters and anglers in Saginaw Bay and other Great Lakes waters is knowing the exact locations of commercial nets so they can avoid them. Providing GPS coordinates of net locations online and/or ports when the nets are set or moved would greatly reduce accidental encounters between boaters and commercial nets. This is an important safety concern that needs to be included in the Statute.

Another concern is allowing the commercial fishers to have their own committee representation to negotiate future regulations with the DNR. Currently, each Great Lake has its own Citizens Fishery Advisor Committee, which acts as a liaison between the DNR and the angling public. Sport fishing groups, chambers of commerce and commercial fishers all have a seat on the committee and a vote in all fisheries matters. Common goals are set for the good of all who use the Great Lakes. To allow the commercial fishers their own unique committee to do business with the DNR is a real mistake. If all special interest groups were allowed to do that, lake wide management would become impossible. The two main by catch species in Michigan’s commercial fishery are: lake trout & walleye.

Finally, the DNR has been negotiating a deal with the commercial fishers behind closed doors for the past six years. The Great Lakes Citizens Fishery Advisory Committees have not been involved nor will they be involved in any discussions leading up to the draft Statute that will be shared with the Legislature. Fisheries Chief Jim Dexter has been quoted as say ing, “Unfortunately this is an issue that could not wait for spring Advisory meetings as they are too far out on the schedule.” I have talked to a couple fisheries biologists who knew nothing about the pro posed draft until a week ago! Developing a new commercial fishing Statute impacts both the sport and commercial fishery, and the DNR has the responsibility to ensue the Lake Committees and general public have plenty of opportunity to participate in discussions and help determine the final version of the Statute. It’s critical that captains and mates call Fisheries Chief Jim Dexter in Lansing (517/ 284-5836) and tell him this proposed Draft Legislation is badly flawed and needs the input of sportsmen throughout the State. ?