Sportsman’s Charters came to the aid of a sinking boat 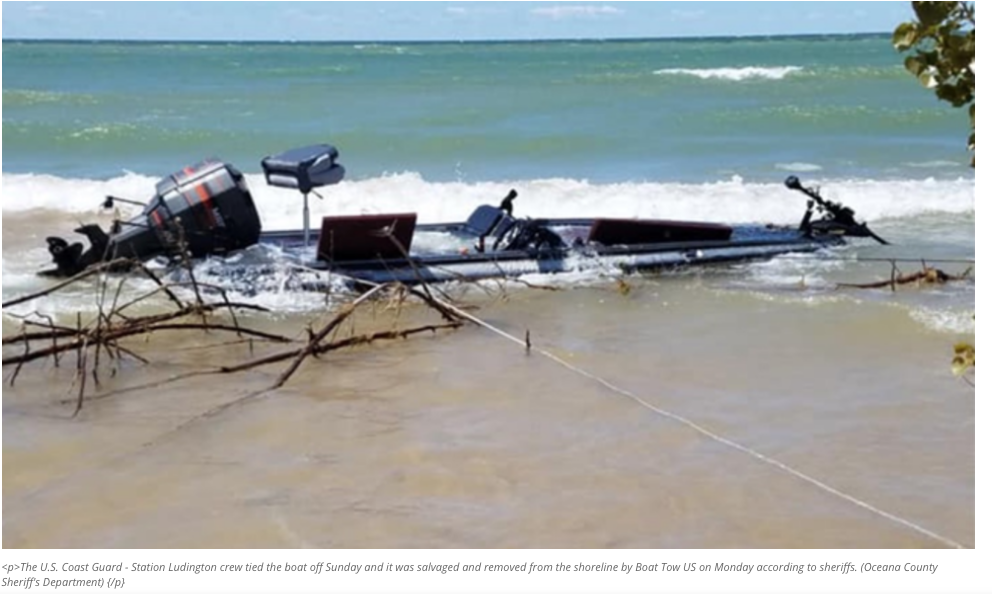 OCEANA COUNTY, Mich., (WPBN/WGTU) — Sportsman’s Charters came to the aid of a sinking boat at the mouth of the Pentwater Channel Sunday morning.

Charles Mears State Park Rangers notified Mason-Oceana 911 of a sinking boat with two passengers around 11:41 a.m., where Mason-Oceana marine patrol and other resources were sent to the scene.

According to the deputy’s report, a 55-year-old Hesperia man and a 54-year-old Sterling Heights woman were on board an 18-foot bass boat about a mile north of the Pentwater channel when they discovered water in the boat.

The pair began to bail water out of the boat and reported that the main engine would not start.

The boaters used their trolling motor to get back to the channel but waves continued to come over the stern of the boat, according to the report.

Captain Trevor Castonia and First Mate Cy Salt of the charter boat “Sportsman” saw the bass boat in distress and reportedly instructed the passengers to put on their life vests.

According to the Sheriff , by the time the charter boat had reached the scene, the bass boat was sinking and the passengers were in the water.

The “Sportsman” crew threw life rings to the boaters and pulled them onto their boat before taking them to the sheriff’s office marine division at Pentwater Village Marina.

Sheriffs reported that both boaters refused medical treatment. The U.S. Coast Guard – Station Ludington crew tied the boat off Sunday and it was salvaged and removed from the shoreline by Boat Tow US on Monday according to sheriffs.