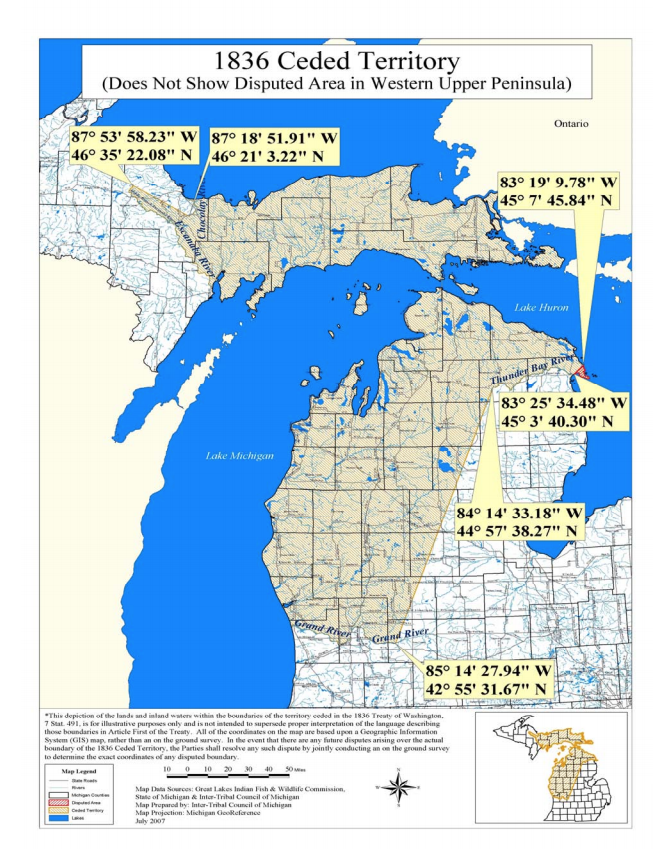 As many of you may know, much of the Michigan waters of the northern Great Lakes are subject to a fishing right that is shared by five Michigan Indian Tribes. That right comes from an 1836 treaty. The rules governing that right to fish are defined by a Court Order that was negotiated in the late 1990s between the Five Tribes, the State of Michigan and the Federal government. The Coalition to Protect Michigan Resources also participated in those negotiations.

The Court Order, also called a Consent Decree, is based on the concept that the fishery is a shared resource. It sets forth the rules and limitations on fishing in the northern Great Lakes by the Five Tribes and State licensed commercial and sport fishers. It has a 20-year term and will expire in early August 2020, a mere 8 months from now.

Since the Consent Decree will expire next August, the Five Tribes, the State, and the Federal government have begun negotiations to try to reach a new agreement on how fishing in the northern Great Lakes will be managed. The Coalition is also a participant in these negotiations. These negotiations will directly impact anyone who fishes, or even uses, the Great Lakes. If a new Consent Decree is reached, it will also directly affect your fishing and it will likely affect everyone who uses the Great Lakes for recreation.

To bring you up to speed on the issues we are facing, set forth below are Frequently Asked Questions and Answers about these issues:

Q. Whose rights are affected by the current Court Order and the negotiations?

A. In reality, everyone in the State who uses the Great Lakes is affected one way or another by the Court’s Order and the negotiations. The Court’s Order directly affects where Tribal fishing operations may fish, where sportfishing is available, how the resource is shared, who may fish and when, what kinds of fish may be caught, what kind of fishing gear may be used by the Tribes, and how many fish may be caught by tribal fishers and sport fishers. The agreement that the parties are trying to negotiate will affect these same issues.

Q. When does the current agreement expire?

Q. What happens if no new agreement is reached by that date?

A. There has been an agreement in place since 1985 so no one has had to face that possibility for 35 years. During that time, a lot has changed in the Great Lakes, however. Prior to 1985, there was a lot of uncertainty over who was fishing where, who was regulating the fishers, how many fish were being caught and where, and there was a lot of conflict between those who fished the northern Great Lakes. If no new agreement is reached, much of that uncertainty is likely to return unless the parties can come up with a short-term solution while they continue to negotiate or unless the Court intervenes.

Q. Are negotiations underway? How are they going?

A. Yes. Negotiations are underway. The parties, including the Coalition, started meeting in late September, much to the frustration of the Coalition. We thought that negotiations should have begun at least a year before that. The issues we face are complex and there are seven separate governments involved, which also makes negotiations complex. Negotiations that led to the agreement reached in 2000 took years. To date, the parties have met for six days since mid-September. Negotiation sessions are set for every month between now and August 2020. In addition, there are “working group” meetings on specific issues. Those meetings have also been occurring since September.

As for how they are going, the going has been slow. There are several fundamental issues that have not yet even been discussed.

Q. What are the issues the parties face?

A. Unfortunately, we can’t talk about the specific issues being discussed at the negotiating table. All of the parties have signed a Confidentiality Agreement that prevents us from disclosing what is said during the negotiations. In order to participate, we had to sign the Agreement. That said, a look at the current Consent Decree that was signed in 2000 can show you the issues that we dealt with then. The issues addressed include:

The current agreement is 57 pages long with dozens of additional pages devoted to amendments, maps and other appendices.