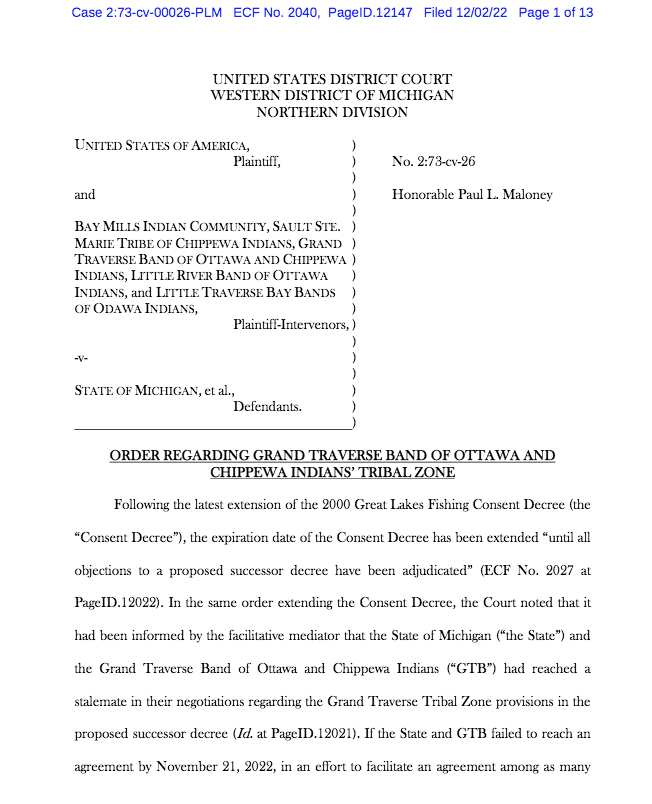 Recent court filings by a conservation coalition, tribes and others embroiled in fishery negotiations show how far the three-year process still has to go.

An existing Great Lakes Consent Decree signed in 2000 governs fishing regulations in certain waters of lakes Michigan and Huron from Grand Haven north around the tip of the mitt to Alpena and most of eastern Lake Superior. Primarily, the decree governs the balance between recreational and tribal commercial fishing of lake trout and whitefish through a zonal approach contained in the 2000 decree. That decree expired in 2020.

The Coalition to Protect Michigan Resources (CPMR) had been participating in the negotiations until recently. Due to the lack of progress and the lack of a chance to have real input into the negotiations, CPMR filed an appeal with the Sixth Circuit Court of Appeals in October, asking that the organization be included in the ongoing Great Lakes Consent Decree negotiations as a full party rather than an amicus, or “friend of the court,” group.

The State of Michigan, the United States and four of the Michigan tribes have opposed recognizing the Coalition as a party claiming that the parties are in the final stages of reaching an agreement and the CPMR involvement comes too late.

Despite this claim, no new agreement is on the horizon. On November 14, one of the Sault Ste. Marie Tribe opted out of the negotiations and asked the court to allow it to manage the fishery separately.

That same day, the court extended the 2000 Great Lakes Consent Decree indefinitely, stating “the Decree shall not expire until all objections to a proposed successor decree have been adjudicated.”

“Continually, the parties of the negotiations have misrepresented timelines, progress and consensus to keep us from being included as a party,” Radjenovich said. “It’s evident through the court filings and the indefinite extension that the parties are not in the final stages of negotiations.”

The coalition was denied its first motion to intervene in a federal court over the summer and then had its request to reconsider denied. The judge wrote in the ruling that “[a]ll seven parties agree that they can submit a proposed successor decree to the court by September 30, and they do not want the [Coalition] to delay that deadline.”

The Sault Tribe’s pending request to self-regulate and be removed from the consent decree is telling in several respects, said Radenjovich.

“Previous conversations lead us to believe that self-regulation by the Sault Tribe will end in little to no oversight of gear, locations or catch by the state,” Radenjovich said. “There can be no consent decree without the consent of the parties and an agreement that the fishery resource should be allocated roughly 50/50 between state-licensed anglers and the tribes.”

CPMR depends on donations to pay for legal fees related to the negotiations. Please consider donating any amount you can to help us stay in the fight. →Read more 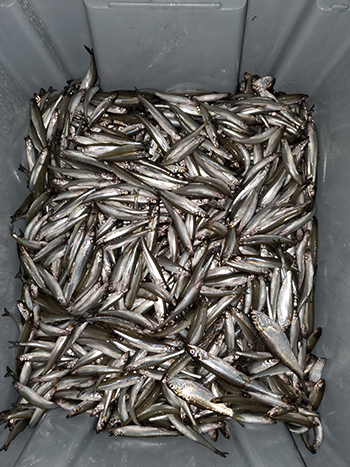 A lot of factors go into effective fisheries management, including the valuable research data conducted each year by Michigan Department of Natural Resources research vessels on Lake Michigan, Lake Erie and Saginaw Bay that guides management decisions on how best to care for fisheries now and for future generations. DNR Fisheries Chief Jim Dexter said the most recent survey results highlight important population trends among walleye, yellow perch and other species, as well as factors such as angler intensity and presence of forage fish. “Regular surveying of Michigan waters tells us things about state fisheries that we’re not going to learn through other means, and that data helps us make sound, informed choices for different regions,” said DNR Fisheries Chief Jim Dexter. “Our research crews and biologists, along with state and federal partners, do an incredible job of collecting and analyzing information that’s essential to these three regions.” Here are the highlights by each survey area: Lake Michigan Saginaw Bay Lake Erie Photos Read more here →Read more